The UK is running out of workers. Depending on whose definition you use, we are at, or very close to Full Employment. At 4% the unemployment rate is at the lowest level for almost 50 years.

4% is even well below the current rate in historically low-unemployment countries such as Sweden, Denmark and Canada.  An all-time record 870,000 jobs are currently unfilled in the UK, with just 1.3m people classed as unemployed, and 33m people in work.

Full Employment is one of the four primary Government macroeconomic objectives (along with Price Stability (stable, low inflation), Sustainable Economic Growth and keeping the Balance of Payment in equilibrium).

Full Employment has benefits, more people in work and earning/less people out of work and not earning. Reduction in welfare payments and the upwards pressure on wages, as we are seeing now, with wages growing at almost 3.5% against inflation of 2.2%, the highest wage growth since the financial crash of 2008.

It is already clear that wage pressures are rising. Employers are reporting recruitment difficulties with shortages of skilled as well as unskilled workers, and even the usually cautious Bank of England’s chief economist, Andy Haldane, commented on “compelling evidence of a new dawn breaking for pay growth”.

But there are potential problems with Full Employment. Maintenance of stable prices (i.e. Inflation gets pushed higher), a surplus on the Balance of Payments – which our exchange rate is already fuelling)….and recruitment.

The negative impact of Full Employment is never more visible than in Recruitment. Every business leader I have spoken to in the last few months has cited problems in attracting talent as one of, if not the biggest challenge and inhibitor to growth.

Basic supply and demand on the back of record number of people in work, fewer people out of work (but looking) than we’ve seen for 50 years and increasing wage costs.

The minimum wage, increased last week to £8.21/hr, ensures that anyone working 40hrs per week receives just over £17,000 per year, with their net (take home) pay tipping just over £15,000 per year. This gives employers of large numbers of lower paid workers reduced ability to offer wage incentives.

As we start to climb up the salary and skill grades, those challenges become worse with a scarcity of people looking for new roles. Three conversations last week with small UK business directors revealed they were collectively trying to recruit 20+ Web Designers, 20+ Electrical Engineers and 30+ Software Engineers; all citing that their growth plan were becoming significantly hindered by locating key talent.

Surely the executive level is immune? The UK has become ever more attractive to do business in, and to work as a director within. The reduction in top rate income tax and corporation tax, both leading to record tax receipts (Google ‘Laffer Curve’ if you don’t understand how that works – unless your surname is Corbyn or McDonnell), has ensured the UK is increasingly competitive for attracting both business and world leading executives.

And yet it hasn’t immunised the problem with executive appointments. The average time taken to fill an executive role has increased from 18 weeks to 24 weeks (not including notice periods). Notice period enforcement has almost doubled in the last 18 months as businesses are holding on to key executives due to the challenges in replacing them.

The best executives are not only working but have no need or interest in pro-actively looking for a new role.

We recently analysed advertisement response since January 2017. The numbers of execs actively looking for new roles enough to locate and respond to advertisements has fallen steadily in the last two years: 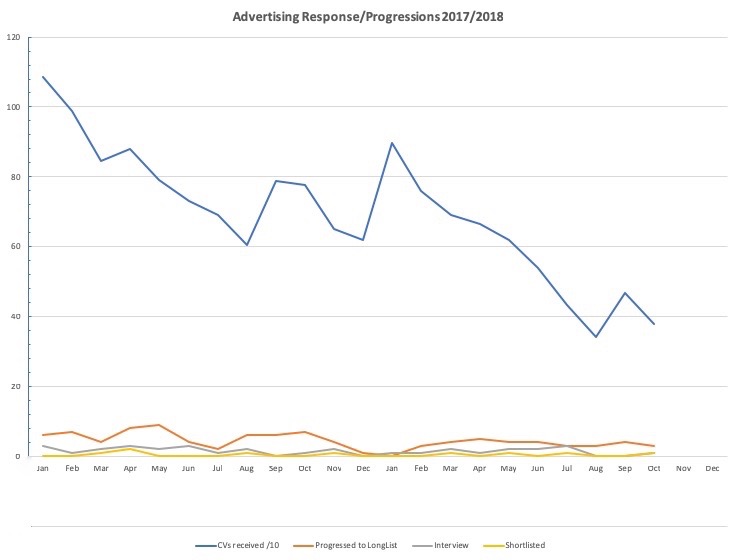 This has played into the hands of Executive Search – Headhunting. The proactivity of executive job searching becomes an irrelevance. Targeting those not currently looking for a new appointment is the mainstay of the 2% of the $35bn recruitment industry occupied by Executive Search. Headhunters.

Indeed, of the 5 assignments we have been mandated/retained on in the last 6 weeks, equalling almost £1 million of salaries, 4 of them had been actively (or rather pro-actively) searched for in excess of 6 months previously, either by the businesses themselves, or more commonly through a recruiter that relies on a database of active job-seeking candidates, or direct ‘selection’ advertisements.

Of those roles, 3 have now already been shortlisted, with the other two under search, but with over 10 people already booked in for interview with me.

The second part the above 2-year analysis confirms the trend. The number of candidates headhunted into live processes has remained upheld, and even increased in terms of quality (onward progression)

The above isn’t to say Full Employment hasn’t added its challenges. The number of offers rejected has almost doubled from 3% to over 5% as ‘buy-backs’ (current employers counter-offering with increased terms), luckily, due to the structure of a retained search process, there are always a 2nd and even 3rd choice stood in the wings.

It has made our processes more challenging and increased the number of approaches we typically make by 20%, but we have still been in a position to complete on all roles within 10 weeks, despite the industry average increasing to 24 weeks, and continuing to offer a ‘cash-back’ guarantee on that quick turn-around. But the challenges are increasing, and with increased uncertainly in the transient nature of the European labour market (especially in the UK due the ‘B’ word), it is a challenge that will continue to be a thorn in the side of growth businesses.

Please feel free to talk to us about your recruitment strategy….Don’t run out of time, or people.

← First Impressions. 13 tips & why you should look at your feet when meeting someone.
31 Hacks to Help Your Next Career Move →

7 Comments on “We’re Running Out Of People….. Beating Full Employment”